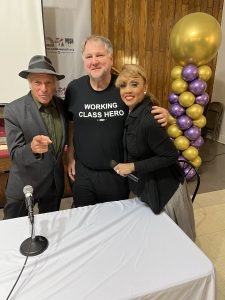 Chicago is the home of many victories for labor and for working people. The eight hour work day was born in Chicago, though not many of us know that. It’s a city rich with history and a city where unions are a way of life. In short, it’s our kind of city.

We spent the day at radio affiliate WCPT 820AM, recording form their studio and meeting some of our favorite local labor folks in the process.

Later that evening, we hosted an event at the Rainbow Push Coalition headquarters on Chicago’s south side. The movie is a documentary by our friend and investigative reporter Greg Palast. It’s called “Vigilante” and it’s about voter suppression, particularly the unbelievable tactics used by Georgia Governor Brian Kemp.

We hosted the event with our friend and fellow radio host Santita Jackson, and both the film and the panel discussion after had people fired up to vote, and voting has never been more important that it is right now.