That was the day the Granite Mountain and Speculator Mines in Butte, Montana caught fire, killing 168 miners.

It is considered the worst underground hard-rock mining disaster in the nation’s history.

Just weeks after the United States had entered World War I, the demand for copper had surged.

Granite Mountain, like many of the nation’s mines, operated around the clock to meet war production needs.

In his book, Fire and Brimstone: The North Butte Mining Disaster of 1917, Michael Punke notes the irony of the disaster, which began as an effort to improve safety.

A sprinkler system had just been installed.

The final task was the relocation of an electrical cable.

The cable was insulated with oil-soaked cloth, sheathed in lead.

Workers lost control of the three-ton cable as they lowered it into the mine and it fell to the bottom of the shaft.

Carrying a commonly used carbide-burning lamp, the night shift foreman accidently ignited the cable as he planned its removal.

The conflagration was virtually immediate and burned for more than three days.

At the time, 415 miners were at work on the overnight shift.

With no alarm system in place, those that could not escape succumbed to carbon monoxide poisoning.

In 1996, a memorial plaza was dedicated to those who lost their lives.

It details a slice of Butte’s mining and labor history that culminated in tragedy.

That was the day one of the worst race riots in American history began in Tulsa, Oklahoma.

In a frenzy of anti-black violence, a white mob destroyed virtually the entire black neighborhood of Greenwood.

Over the course of two days, as many as 300, mostly black residents were killed. ‘Black Wall Street’ had been burned to the ground, leaving 10,000 homeless.

The day before, Dick Rowland, a young black man tripped as he boarded an elevator at his job.

He fell against the young white woman elevator operator.

When she shrieked, nearby department store employees assumed she had been assaulted.

Rowland was arrested and newspapers fanned the flames of race violence and vigilantism.

On this day, white racist mobs surrounded the Tulsa County Courthouse where Rowland was being held and demanded he be turned over to them.

Returning black veterans had become increasingly assertive about their rights as citizens.

They marched to the courthouse, armed in an attempt to prevent Rowland’s lynching.

When the vets refused to disarm in the face of demands by the white mob, gunfire ensued, touching off 16 hours of fighting that literally decimated the community black workers and professionals had built up over the course of decades.

The National Guard was called out, mainly to disarm and round up black residents of Greenwood. Witnesses reported that Greenwood was bombed from the air by police and by Sinclair Oil company planes.

The history of the riot was buried for more than half a century.

It would take until 1997 for the Oklahoma State Legislature to set up a commission to uncover the bloody details, produce a 200 plus page report and recommend millions in reparations. 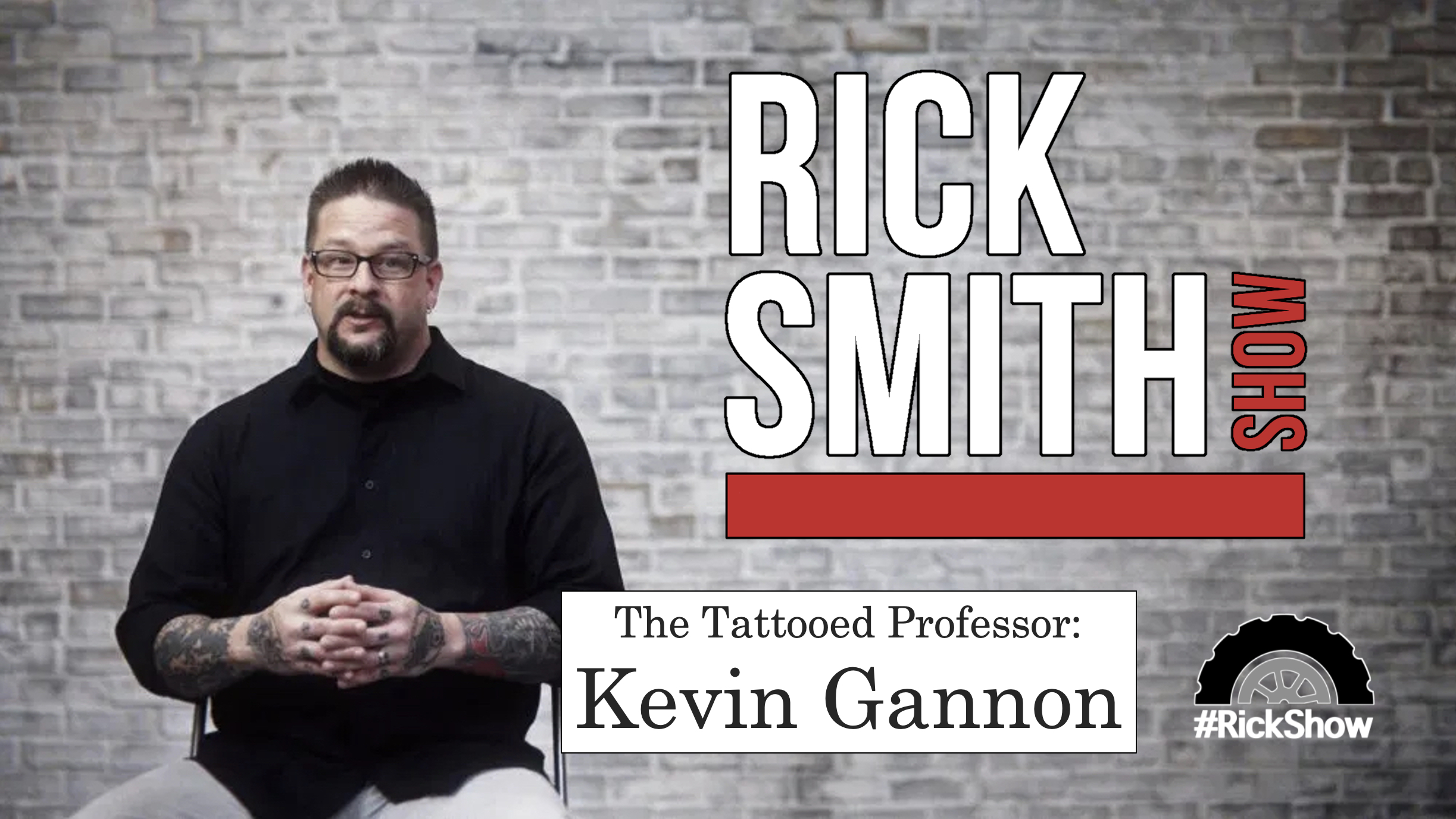 The argument is simple: large segments of the US working population once belonged to unions. In those unions, we found power, but we also found community. And while a lot of attention has been paid to the power we lost as union membership declined, we have spent much less time talking about how we lost that sense of togetherness, that sense of solidarity that unions provided. And what has replaced that community, in many cases, has been a dangerous form of right-wing conspiracy worship in the form of militia membership, Qanon, and anti-government lunacy in a variety of forms.

Historian Kevin Gannon, who many remember from the Netflix documentary 13th, joined The Rick Smith Show to talk about how this happened, beginning with those who could have fought it, should have fought it, but mostly chose to sit it out, and how that choice was perceived:

Rick: “[Workers] want somebody who they perceive is going to fight for them, even if it’s the wrong fight.”

Rick: “If there’s a street fight, [the Democrats] will offer to hold your coat. Maybe. I want somebody who’s gonna ball up their digits and get in there and mix it up.”

Kevin continued, turning to the subject of how the right co-opted those old coalitions and transformed them into a population that now votes for the very people who have been taking power away from working people for generations:

Kevin: “[The] working class […] is the most powerful multi-racial coalition in this country and when you have white workers who […] feel alienated and are committed to having somebody fight for them and then the right says “We’ll fight for you because you’re white,” well, you’re still fighting for me, so all the potential that is embedded in working-class politics and good progressive union-oriented working-class politics has been co-opted for the last several decades.”

Rick: “[T]his is where unions served a real purpose. It brought people together. It got people to join into a common interest and that common interest is better wages, hours, conditions, better opportunities for our families, better communities. That was the what drew us together and as Republican policy – and some Democratic policy […] Democrats were responsible for the destruction of unions too – destroyed the union’s ability to bring people together, those people sought other things out. And that’s how you end up with the Q-kooks and all these right-wing militia groups and all of this insanity that’s out there.”

While no one argues that this is the entire reason for the rise of the conspiracy culture we now live in, none can argue that this is not a significant factor in how we ended up where we are today. It’s an important discussion, and one that isn’t going away any time soon.

To hear the rest of Rick and Kevin’s conversation, the podcast is available below:

That was the day the 54th Massachusetts Volunteer Infantry marched through the streets of Boston in a farewell parade and then boarded ships headed for Beaufort, South Carolina.

Thousands lined the streets for the send off, including prominent abolitionists William Lloyd Garrison, Wendell Phillips and Frederick Douglass.

It was the first Black regiment organized to fight in the Civil War.

Abolitionists had wrestled with Lincoln and others that the Civil War wasn’t just about preventing national disintegration but about ending the slave labor system.

They were emphatic that slaves and free black men had a right and a vested interest in fighting for their freedom and the freedom of their families.

Finally the Emancipation Proclamation of 1863 codified that demand as it abolished the slave system.

Others came from as far away as Canada and the Caribbean.

Fathers and sons enlisted together.

The Union Army was far from free of its own anti-black prejudices.

A young Colonel Robert Gould Shaw was put in charge of the regiment.

Though Shaw and hundreds of troops would soon be killed in battle at Fort Wagner, the regiment forced the Confederacy to abandon the Fort altogether.

The “Swamp Angels” as they were called, would continue to exact justice throughout the South for the duration of the war.

They served as a model for other black regiments, whose fighting proved decisive for victory.

That was the day the Steel Workers Organizing Committee or SWOC, called a nationwide strike against three of the four ‘Little Steel’ companies, Republic, Inland and Youngstown Sheet & Tube.

The drive to organize Little Steel came on the heels of an historic agreement with U.S. Steel and J&L earlier in the year.

In his book, The Last Great Strike, legal scholar Ahmed White points out that SWOC leaders established a three-pronged strategy in their organizing efforts: to breakdown racial and ethnic differences among workers, to use the Wagner Act and newly formed NLRB to their advantage whenever possible and to take over company unions where they existed.

Sheriffs departments began the swearing in of deputies.

Republic and Youngstown Sheet & Tube started shipping and stockpiling munitions, including machine guns and tear gas to mills throughout the Midwest and Northeast. Scattered walkouts and wildcats began throughout the latter part of May as SWOC continued to demand recognition and first contracts.

And on this day SWOC delegates from the Little Steel locals met in a Youngstown ‘war council’ to demand a strike.

The strike began late that evening with the shift change at 11 pm.

The mills were shut down tight.

Pitched battles between strikers, scabs and police continued throughout the summer with hundreds arrested.

Anti-union violence would explode with the Memorial Day Massacre in South Chicago and the Women’s Massacre in Youngstown the following month.

After five months, the strike collapsed. It would take until 1942 before recognition was finally won.